In 2020, the Columbia River Inter-Tribal Fish Commission (CRITFC) assumed stewardship of the Center for Coastal Margin Observation and Prediction (CMOP) seeing it as a perfect complement to their efforts to combine cutting edge scientific research with traditional ecological knowledge in the estuary and ocean environments. CMOP, based in Astoria, Oregon, at the mouth of the Columbia River, is a nationally renowned ocean and estuary research program dedicated to further understanding the linkage between the Columbia River and the Pacific Ocean. CMOP uses remote sensors, models, and open data access in ways that help stakeholders manage ecosystems, facilitate sustainable development, and protect lives and livelihoods in our changing environment.

The CMOP observation network consists of buoys and dock-based fixed stations in the estuary and plume. Physical parameters such as salinity, temperature, water levels, and currents have been measured and recorded since 1996 and biogeochemical parameters such as chlorophyll, turbidity, nitrate, and dissolved oxygen since 2008. These measurements provide a record of variability and change in this important ecosystem. CMOP stations can be used for deploying new monitoring equipment and for collecting water samples for lab analysis. 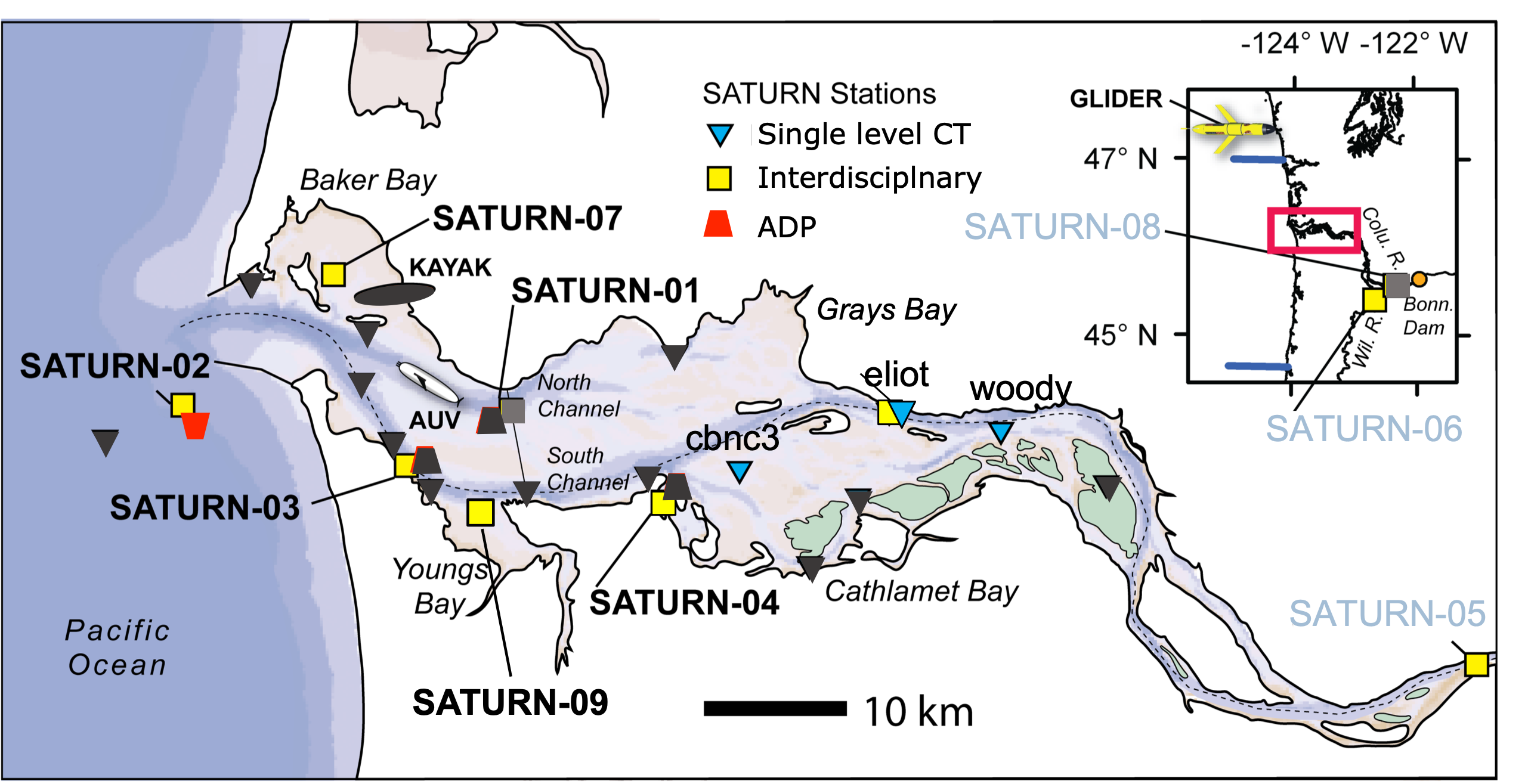 Map of CMOP observation network in the lower estuary and coastal ocean.

CRITFC’s co-management ethos dictates that wherever the salmon go, we go with them. CMOP observations of water temperature and dissolved oxygen are directly relevant for salmon health.
Observations of salinity are important for monitoring the risk of salinity intrusion into freshwater wetland habitat, particularly in the Cathlamet Bay, Oregon.

Model outputs are used to create indexes describing the estuary and plume, such as plume volume and salinity intrusion length, and climatology maps of salinity and temperature. Model outputs are also used to create estimates of potential juvenile salmon habitat and used in individual based modeling (IBM) of juvenile salmon migration. A new version of the model will include an improved representation the upper portion of the estuary and could be able to model water quality, sediment transport, and aquatic vegetation. 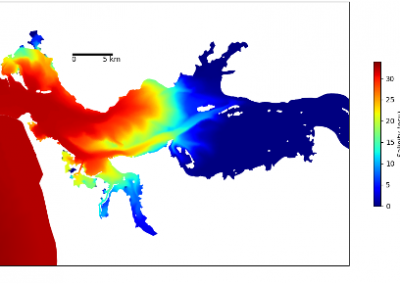 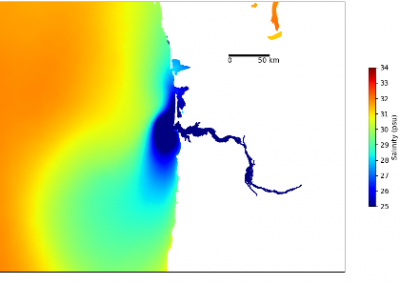 The National Ocean Service’s (NOS) operational ocean forecast models provide coastal flooding model guidance, forcing and boundary conditions for downstream models used by NOAA to forecast extreme weather, rip currents, storm surge, and flooding to protect people and property in the Pacific Ocean Basin. CMOP, in collaboration with NOAA, is developing and enhancing the surface current, tidal, and storm surge simulation capabilities in these models by extending the coverage both at the basin-scale and along the US coast and estuaries. By anchoring the modeling through high-resolution implementations of the unstructured-grid code SCHISM, enhancement of bathymetry, topography, shoreline, tidal gauge and external forcing data and products are being produced that will be integrated into future versions of the Extratropical Surge and Tide Operational Forecast System (ESTOFS).

CMOP has a long history operating in the estuary and is a known to the local community and to the regional oceanographic community. Through new partnerships, CMOP plans on expanding the understanding of the linkage between the ocean and estuary, both in terms of how it impacts the region’s salmon runs and quantifying the effects of climate change in this important and delicate ecosystem.

Our co-management ethos dictates that wherever the salmon go, we go with them. [CMOP], alongside public and non-profit partners, brings tribal co-management and vision to the estuary and ocean environments.”

A detailed description of the CMOP system is available in an open access reference paper.