The PE sensor at Saturn03 is much noisier since it was re-deployed in July.  The following figure shows plots of phycoerythrin vs. turbidity by month for the 2010 & 2011 summer side by side.  Note that the scales are different due to shifts in both the turbidity & phycoerythrin baselines after the July re-deployment of these sensors, but the axes have identical ranges (50,000 rfu’s for PE & 160 ntu’s for turbidity) so that they may be easily compared. 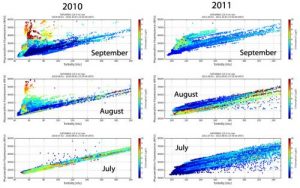 The noise is due in large part to a drifting/wandering of the phycoerythrin baseline. It appears that the wandering occurs from relatively rapid shifts (over the course of hours or less) in the PE baseline, followed by intervening periods of baseline stability. 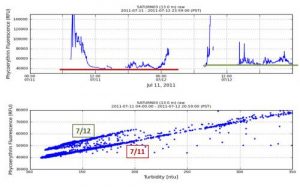 The important point is that this sensor did not behave this way during its earlier deployment so we should try to determine what has caused this change and whether or not it is not a properly functioning sensor.

I also took a look at whether the clean water offset data could be used to capture and correct for the baseline wandering.  When looking at a plot of all of the data, it does look like the CWO data track the baseline fairly well and are a good indicator of the instument’s stability. 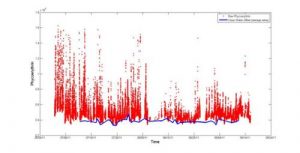 I attempted a simple correction by subtracting the nearest CWO value.   While this approach seemed to catch the shifting baseline well sometimes (as in the following figure)

It failed to properly correct for the wander much of the time and overall it did not do much to reduce the noise in the PE vs. Turbidity relationship. It only nominally improves the noise when dealing only with data within an hour or two of the CWO readings.

A more complicated analysis to recognize when the actual shifts in the baseline occur (which seem to occur during ebb or low tide much of the time) and then which CWO reading to apply (the one before or after) may improve the use of the CWO to correct for the jumping baseline, but this is more complicated and I have not done this yet.
Without a good fit, the turbidity correction is less accurate making it more difficult to see the true PE signal amongst the noise and this will prohibit detailed analyses of phycoerythrin patterns. However, Charles has suggested that the data may still be useful as a detection tool for larger events:

“As an event detection tool, I think making a slope-based correction for turbidity and then subtracting the lowest corrected PE signal from all three PE signals would work reasonably well (looking back at 2010 data, this method looks like it would have underestimated the magnitude of the PE events at some points where a PE signal was present at all three depths, but would have identified high concentration events. There would remain a large uncertainty in the magnitude of the events (due to the possibility that the lowest value is not a non-detect), but it might at least accurately flag non-events as non-events and events as events. It would also discard all data for which there is not at least 2 depths available.”

I will look into using the data in this way.